This time in English
Everybody uses the end of the year to talk about the big picture. I'm mostly addicted to the small picture. Since I used the end of December to unplug myself from the world, I am using the beginning of 2012 to travel back through those 2011 images that left an impression on me for different reasons:
TV IS OVER 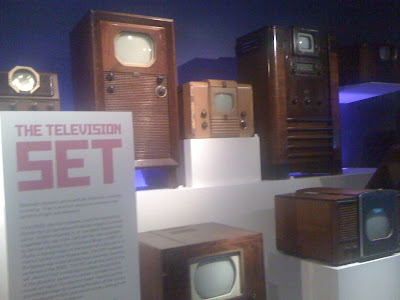 Last January, tired of enduring news anchors who don't give me any news and watching movies that don't deserve to be watched, I threw away my tv set. Then I went to visit the recently renewed Museum of Moving Image in New York and discovered those beautiful old tv machines. Looking at them made me even happier about my decision: in the XXI century there's no better place for a tv set than a museum. They belong there. Their time (and their content) is definitely over.
PLEASE, HAVE FEAR 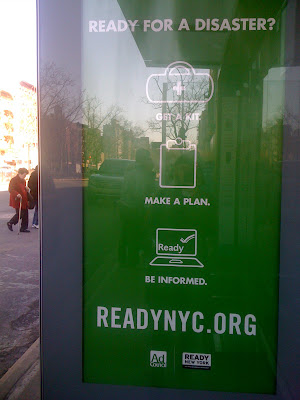 Among the many shameful things that we New Yorkers had to cope with since the S11 attacks, I would rate the unwanted pledge 'dear politicians, threat us with fear please' as the top one. The continuous bombing of 'get/ready/for/catastrophe scenarios/' is unbearable. The 10th anniversary of the attacks underlined very strongly that sort of 'emotional pornography' that we have spent ten years enduring. (I wrote extensively about it in this blog). Lucky for us there is people working in that field that in their attempts to be 'creative' they achieve laughable results, such as the 'Preparedeness 101: zombie apocalypse', which I discovered when that very American fear called The Rapture was about to happen.
THE 'CONSUMER EXPERIENCE' 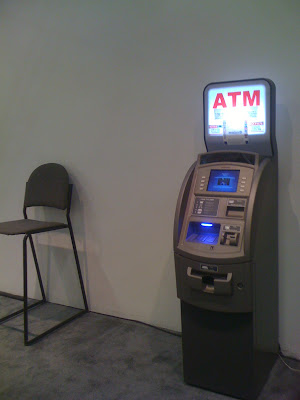 It's the line that has taken over our world. Everything is about the consumer experience. We aren't anything but consumers. 'The experience' is this new and engaging word attached to the act of spending money. It seems to erase all the bad connotations that 'consumer' could have for those who love 'experiences'. In fact, years ago you could go to an art fair such as The Armory Show, and be just 'an art lover', and look at art. This year I found this 'relevant' piece inside the fair. An ATM. Was it there as a piece of art? Not exactly. It worked. It gave me money. From my bank account. I paid a stupidly high amount to have a drink inside the fair, and I didn't enjoy 'the consumer experience' of expensive and awful wine. My fault, I guess because... since when an art fair was about the 'consumer experience'? Didn't it suppose to be about The Art? Try to google 'consumer experience'... It's getting even scarier.
OVERPOPULATION 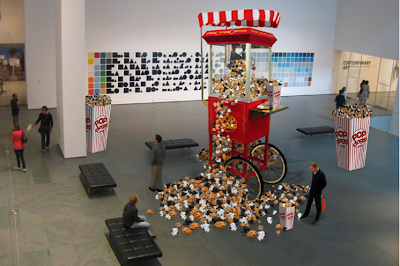 Some people try to make a difference with their work. I met artist Carlo Sampietro two years ago when he started with his project The Street is in the House: it was about recycling news boxes and transforming them into new things such as an aquarium, a dishwasher, a wine fridge, a terrarium... Now he has a new project, Pop Dogs, a mobile installation that takes the traditional popcorn machine and replaces its edible content with plastic toy dogs as an expression of dog overpopulation in big cities. I saw how he struggled over the whole year to put this project together. Having quit the advertisement world to pursue very engaging art proposals that make his soul happier, I believe he deserves some attention.
WIG CITY 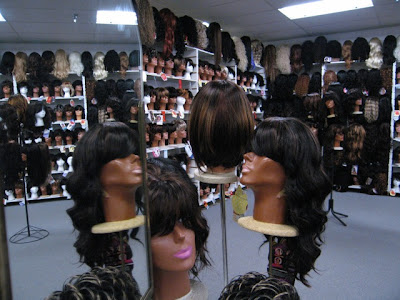 Bourbon, horses and... wigs!! That is what I found in Louisville. I went there to cover the Humana Theatre Festival and my first walk around the city brought me to 4th street. Nobody was able to explain to me why there are so many wig stores in one single street. Some people didn't even know about those stores. I was in awe, the paradise of the wig lover and nobody knew why? Then somebody dared to suggest: "Black women in this city love wigs". And I understood: almost everybody at the festival was white. The cultural racial gap. Such an American curse.
BROKEN DREAMS AND EMPTY WALLETS 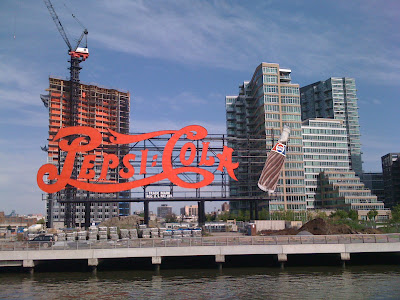 The New York view across the UN wouldn't be the same without this familiar Pepsi sign. Behind it, I saw those buildings in construction last winter. They remind me of my country, Spain, where the booming construction industry felt apart three years ago leaving behind a wrecked land of broken dreams, empty wallets and dead construction sites. In the USA, 'paradise mortgage country' became 'subprime mortgage nightmare' and many cities such as Detroit or Las Vegas fell under its spell. Some neighborhoods in New York were hit hard by the mortgage crisis too, but in this city you cannot avoid the view of new skyscrapers reaching up. Gordon Gekko said it clear: 'money never sleeps'. Cranes neither, I would add. Crisis, in this city, is very relative. It depends on who you ask: those 20% of New Yorkers living under the poverty line *around 2 million people, or those 35000 who made more than 1 million a year.
More in the next post...
Posted by Barbara Celis at 12:09 PM