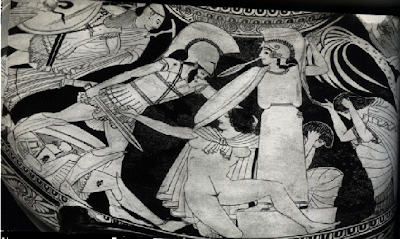 Helen Benedict, “The Private War of Women Soldiers", Salon.com
Posted by Barbara Celis at 12:59 PM 4 comments: Links to this post 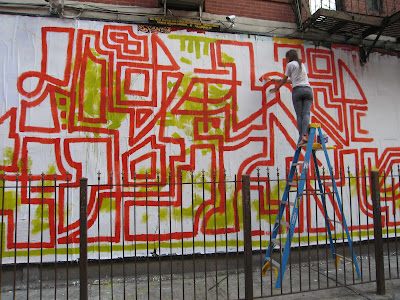 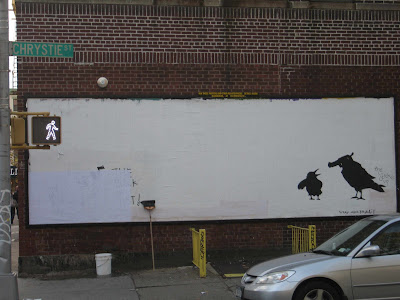 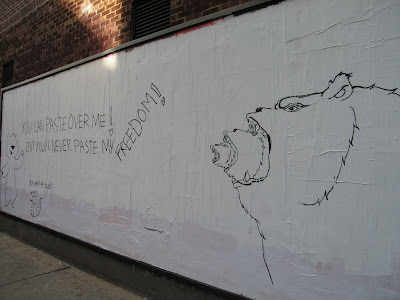 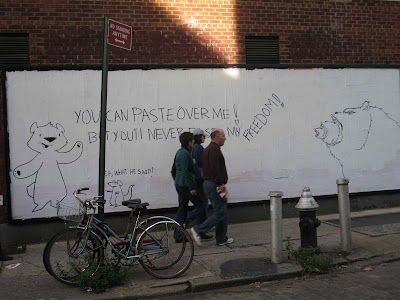 Unfortunately I wasn't able to follow the project all day long like I did last time but my good friend Xavi did and we will have more pictures later on. I'm sure the Public Ad Campaign web and the wooster collective will have some pictures too. I'm also editing a short video.
Posted by Barbara Celis at 9:48 PM 8 comments: Links to this post

ANOTHER GREAT HOAX BY THE YES MEN

Lately I feel as the unpaid spokesperson of these guys but I can't stop talking about them if they don't stop doing great things. This morning The Yes Men made the US Chamber of Commerce look very stupid. As it's been reported, more and more business (from Apple to Pacific Gas & Electric included) are quitting this institution in protest for its aggressive opposition to climate legislation, currently in Congress. Among the many surreal things the chamber defends their unsustainable position calling for the 'Scopes Monkey Trial' to prove the science of climate change... (and that is not a hoax!)

Well, this morning DC journalists found on their desktops an invitation to attend a press conference in which the chamber, one of the most influential institutions in Washington DC, was suppose to announce that it was dropping its opposition to climate-change legislation. Of course, everybody showed up, from Reuters to The New York Times and even tv networks got excited about it:


Unfortunately it wasn't true. It wasn't the chamber, it were The Yes Men, impersonating officials from the chamber and and leading the press conference in their name. Everybody followed until a real Us Chamber of Commerce official showed up and screamed at everybody. This reporter from the Washington Post was there. His article tells it all. It seems there was a very funny fight between the real chamber's official and a fake one. In any case, now everybody knows that the US Chamber of Commerce is one of the main obstacles to get a real climate change law passed in this country. Thank you again Yes Men (and Avaaz Action Factor, an activist group who team up with them in the prank). Amazing video of the hoax:

Posted by Barbara Celis at 5:29 PM No comments: Links to this post

Email ThisBlogThis!Share to TwitterShare to FacebookShare to Pinterest
Labels: hoax, the yes men, us chamber of commerce, yes men

ONLINE TRAVELING TO THE SOUL OF NYC

Today I came across The City of Memory, a website that it's a gift for either new yorkers or tourists and that helps to rethink our way to use the web to enlarge and share information, knowledge or just beauty. Just go and check it out. I won't say anything else about it.

(Actually, what it's fair to say is that I found out about it through this interesting discussion about the future of Arts Journalism that was part of the first ever National Summit on Arts Journalism that was organized a couple of weeks ago by the USC Annenberg School of Communication. If you are a journalist, I strongly recommend to check that out too, specially this video (the whole summit is online) and this magazine called flypmedia, one of the finalists in a contest about how to rethink our way to do arts journalism).
Posted by Barbara Celis at 3:13 AM 2 comments: Links to this post

Email ThisBlogThis!Share to TwitterShare to FacebookShare to Pinterest
Labels: national summit on arts journalism, the city of memory, usc annenberg school of communications

I didn't even know there was a philosophical theory called The Fun Theory. According to the blog Less Wrong which is run by the Future of Humanity Institute at Oxford University, the fun theory "is the field of knowledge that deals in questions such as "How much fun is there in the universe?", "Will we ever run out of fun?", "Are we having fun yet?" and "Could we be having more fun?".

Forget about 'to be or not to be'. The theory of fun is definitely more... fun! and it's no joke! It poses wonderful philosophical questions that actually are part of "a very serious business" according to its followers. "The prospect of endless boredom is routinely fielded by conservatives as a knockdown argument against research on lifespan extension, against cryonics, against all transhumanism, and occasionally against the entire Enlightenment ideal of a better future. Many critics (including George Orwell) have commented on the inability of authors to imagine Utopias where anyone would actually want to live. If no one can imagine a Future where anyone would want to live, that may drain off motivation to work on the project".

So, there is actually people out there thinking how to theoretically improve our lives using fun as the main engine! (for anybody interested in the whole theory look here). I guess Volkswagen heard about it and in their obsessive quest to look green-friendly, like every car company out there that wants to change their 'polluted/pollutant/ image' into something eco-responsible, they organized a contest using "fun" as way to change people's behavior. No matter what do you think about the automotive industry, the results are... inspiring:

Posted by Barbara Celis at 6:19 PM 2 comments: Links to this post