ZOMBIES WITH A MISSION 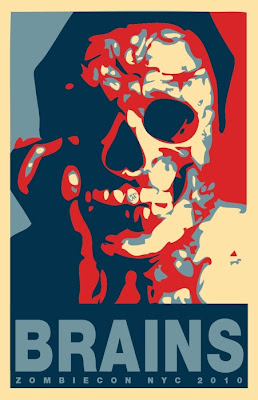 Hollywood is always late. Years before a rain of zombie movies flooded theaters around the world, a bunch of zombie-lovers created an annual zombie-gathering in New York. If my dead brain doesn't fail me, I was there in 2005, dragging my rotten flesh around the city with a bunch of crazy zombies that took over Manhattan streets for a whole day. It's an unforgettable experience, hundreds of zombies with a mission enjoying the daylight. In fact, the gathering goes beyond the zombie-mania, as the organizers explain in their website: "We gather once a year to attack NYC in a theatrical, absurdist parody of blind consumerism and brainless politics. Each year, we choose a theme to resonate with the times and attack city landmarks accordingly, stopping frequently for brains and beers".
This year Fox News was one of the targets, and those insane tea party people as well. Unfortunately, I wasn't there but you don't need a journalist anymore to get the news:

Posted by Barbara Celis at 1:43 AM