WHEN LEONARDO BECAME A FILMMAKER 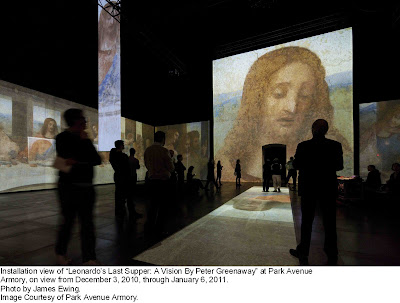 It will blow up your mind. Leonardo's Last Supper: a Vision by Peter Greenaway will open on Friday at the Park Avenue Armory in Manhattan and you shouldn't miss it. Imagine that Leonardo da Vinci could have had the tools of a XXI century filmmaker: cameras, projectors, 2000 lights and gigantic screens... He only had his genius and his brushes, and just with that he gave us one of the most delicate and impressive paintings in history, The Last Supper, a fresco housed in the Refectory of Santa María delle Grazie in Milan, which changed and revolutionized the idea of painting, perspective and art in the XV century. Then, six centuries later, a man in love with painting such as artist-filmmaker Peter Greenaway has done magic. "Painting is the cutting edge of all art notions. Painting will be the last activity men will do when the civilization collapses" he said during the presentation. He has taken that masterpiece and has played with it using the tools of a filmmaker and the admiration and respect of a real art lover (before jumping into filmmaking he was trained as a painter). 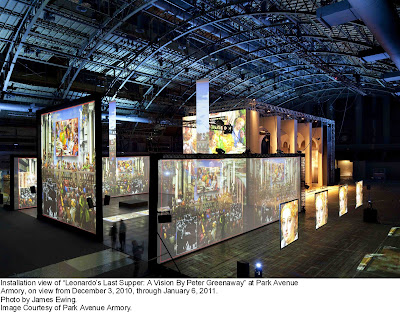 The results are difficult to describe: you need to experience this massive installation that will involve all your senses with lights, images, multimedia and sound in a celebration of the Italian masterpiece. First you will find yourself surrounded by massive screens that will immerse you in the history of Renaissance painting and architecture (the music and sound help to travel in time), and then you will enter The Supper Room: in front of you an almost perfect reproduction of the painting (high end technology by the Spanish company Factum Arte has allowed Greenaway's team to do this superb clonation) that looks at you as if you were for real in the original church. 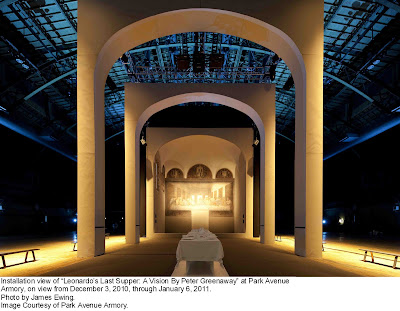 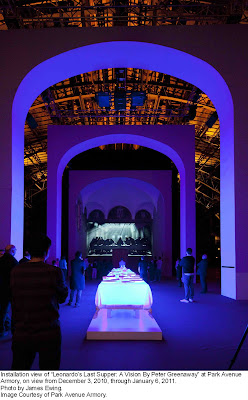 A massive reproduction of the table on the floor allows you to give a closer look at the setting in which Jesus told the apostles that one of them was going to betray him. Then, 2000 lights start playing with shadows, perspectives, colors, projections... giving you dozens of possibilities around a painting that transforms itself into a live creature. "We use the language of our age to farther enrich with contemporary tools one thousand years of culture" Greenaway says. 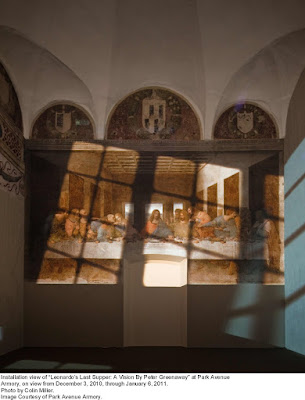 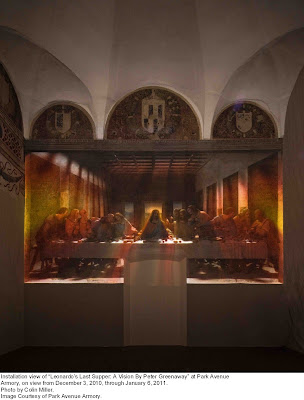 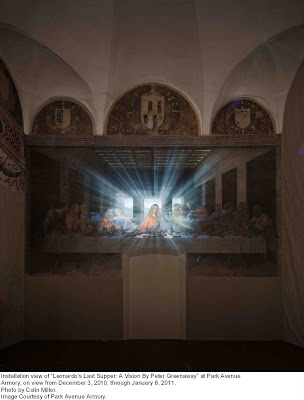 He wanted to mix "8000 years of western culture with 115 years of cinema". On his mind a big worry: "The laptop generation believe there is no painting before Pollock and no cinema before Tarantino. This is my way of showing Da Vinci to this new generation". 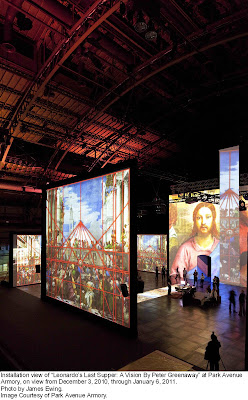 The whole experience doesn't end here. The epilogue of the show is a third multimedia exploration based on Paolo Veronese's The Wedding at Cana. In this case Greenaway has chosen to play with more than hundred guests that populate the painting and imagine the sound of the party, the gossipy comments around Jesus and even the barking of the dogs. The filmmaker's voice takes over at one point to explain, as in a guided tour, the different mysteries that surround a painting that was plundered by Napoleon from the monastery San Giorgio Maggiore in Venice (the painting was part of the Refectory built by Palladio, the most perfect marriage between architecture and painting of that time), cut in three pieces, and placed at the Louvre in Paris.

I saw it this morning and I am still in awe. I can't help it. I love Greenaway. He reminds me of my father, a painter himself fascinated by art and filmmaking, (not as famous, though).
He showed me some of Greenaway's first movies, The belly of an architect and The cook, the thief, his wife and his lover...
Greenway wants to continue the Nine Classical Paintings Revisited series (that's the name of the whole project) with Guernica by Picasso and Las Meninas by Velazquez. I won't miss it.

Pd: a quick pick at the highlight scene of The cook, the thief, his wife and his lover... just for film lovers and Helen Mirren fans:

Posted by Barbara Celis at 1:10 PM