I wrote already about the trial that should have started in New York last week against Royal Dutch Shell for the killing of seven Nigerian activists, including the writer Ken Saro-Wiwa. It was suddenly suspended and then... magically... settled. Shell didn't want to go to court, it would have been too dangerous for its reputation to have Nigerians revealing dirty details of its activities in the Niger Delta. It was easier to pay 15.5 millions and avoid witnesses to explain openly how oil companies pollute, destroy and kill in almost every country they operate in. After more than a decade struggling, the plaintiffs consider the settlement a real victory: "This shows that corporations cannot act without accountability” said Jennie Greene, a lawyer with the Center for Constitutional Rights, which brought the case on behalf of the plaintiffs. I am not so sure about it. The 15.5 million dollars are peanuts for a company as big as Royal Dutch Shell and it won't make any difference in the polluted and violent landscape in the Niger Delta. Although it's true that it's a symbolic precedent in the fight against corporate impunity, I agree with El malcontento, "it's a scandal that they sign a check and get free of responsibilities" (in Spanish). 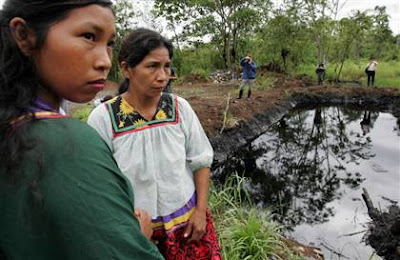 picture by Dolores Ochoa, AP
But maybe there is hope. Another similar case is actually in development in Ecuador against Chevron-Texaco. An Ecuatorian lawyer representing 30,000 people is fighting alone against the monster. The battle between the indigenous communities in the Ecuadorian Amazon (nearly destroyed by oil drilling) and Chevron started 16 years ago. The lawsuit alleges that Texaco, which was acquired by Chevron in 2001, unleashed 18 billion gallons of toxic wastewater across an estimated 1,700 square miles of rainforest (check ChevronToxico web for details) . Plaintiff's lawyers say Texaco's dumping represent 30 times more than the crude spilled in the 1989 Exxon Valdez disaster in Alaska. Hundreds of people have died of cancer and thousands are sick. According to a report by a court-appointed expert, Chevron could face $27 billion in damages. That's not only real money, it would be an unprecedented victory for environmentalists and local communities alike. Unfortunately, Chevron has also the money to make this process as long and as tortuous as possible so the sentence could still take years. 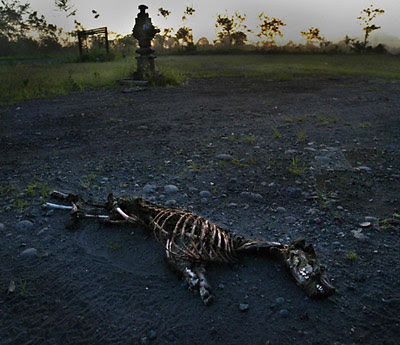 Picture of Bryan Patrick from his award winning series The Devil's excrement for the Sacramento Bee (Ecuador, 2003)
If you are curious about this case you should see the documentary Crude, (playing in New York on June 13 at the Human Rights Watch Festival) by director Joe Berlinger (director of great titles such as Paradise Lost and Metallica: that kind of monster). Crude is quite good although it probably pays too much attention to Trudi Styler, one of the celebrities who has embraced this cause. In the other hand, the involvement of stars in this fight has brought lots of attention to their lawsuit and recently even 60 Minutes did a story on it. I don't know how to feel about celebrity-activism but it seems that lately journalists take an interest in forgotten stories only when there is a famous face behind so, I guess in this case we have to thank Sting???
Posted by Barbara Celis at 4:40 PM