THE NYSAT VIDEO IT'S ON ITS WAY

Sorry, I had some technical problems with the video about the 'New York Street Advertising Takeover' (NYSAT) but it will be finally up THIS EVENING!! In the meantime some more details to feed the curiosity of those who still can't believe this could happen in Bloomberg's aseptic Manhattan: 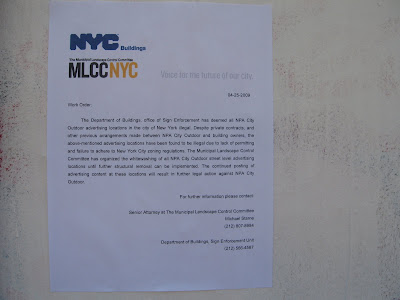 This is the fake note they stuck on each billboard they whitewashed, phone numbers and people's names are real, everything else it's made up -but maybe it should be real...-. Artists and volunteers wearing city construction vests painted the billboards, put up the note and gave these new canvases to artists to enjoy. Ephemeral art, since Apple ads took over again the billboards less than 24 hours later... But those new yorkers who witnessed the action won't easily forget it! See picks and read the whole story in my last post.
(I have been said that, apparently, I broke the story. Thanks to everybody for linking this blog to theirs, now you are making me write in English! -pero seguirá habiendo también español-)
Posted by Barbara Celis at 4:00 PM