Be ready. When you wake up on Monday morning something really smart and fun will have taken over New York. I know, almost every president in the world is gathering in the city this week either to give long and empty speeches at the UN General Assembly - usually you have to read between lines to find 'some real meat' in their words, diplomatic language, I guess- or at the so called Climate Week, but I am not talking about them. I'm talking about The Yes Men. These glorious activists are bringing some real action to the scene in the morning. You will read about it here and all over, I am pretty sure. If you wake up early you will bump into their 'new product' all around the city. 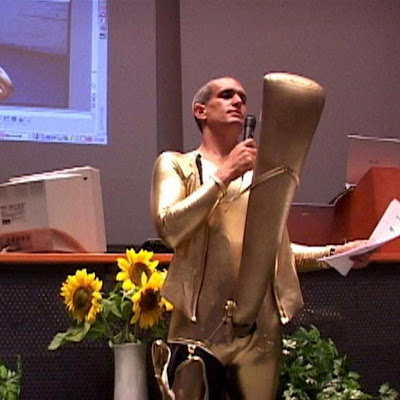 The Yes Men in action
at a business conference
Then, at night, the meeting point is at the movies. The Age of Stupid, a documentary by Franny Armstrong, is being released with a worldwide premiere, one night only (en Spain también). There will be a green carpet downtown in New York -even the biggest activists need their fix of stars- but what it really matters is the content of the pic. I haven't seen it yet so I can't talk about it but the director has really good credentials as a documentary filmmaker and as an activist. She is the director of McLibel, a very good documentary about a ten years lawsuit between McDonald's and two activists who wrote a pamphlet about the company saying things like "McDonald's wastes vast quantities of grain and water, destroys rain forests with poisons and colonial invasions, sells unhealthy, addictive junk food, or is complicit in Third World starvation". Below is The Age of Stupid' trailer, it looks pretty apocalyptic but for once, instead of watching fiction Apocalypse movies paid by Jerry Bruckheimer you could watch your quite possible future. Those big guys meeting in New York for the Climate Change week should do something about it. I´m afraid they won´t. We should.
Posted by Barbara Celis at 10:18 PM