GETTING TO KNOW LOS ANGELES #2

This is the second chapter on a series about experiencing LA as a potential Angelina. 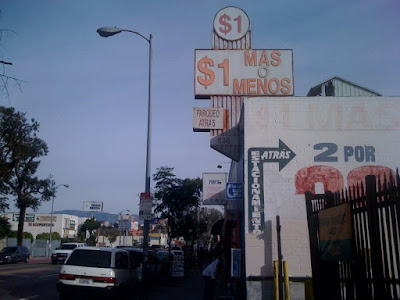 IMMIGRATION, LOVE AND MOVIES
I am living around MacArthur's park, which means I am a white girl with blond hair and blue eyes around Guatemalan, Salvadorian and Mexican workers who think I am a gringa who doesn't understand Spanish. It's a lively neighborhood where you can incessantly listen to Jose Luis Perales , buy cheap socks and impossible clothes, have great tacos, pupusas -and great pastrami at Langer's- and get fake green cards.

"ID's, ID's". That's the most common word uttered around the area. The cholos (gang people) control the business but deep in the chain of command there are illegal immigrants walking the streets and offering their bargains: the cheapest ID is $40, the most expensive could be $700. Maybe because I look 'gringa' but I speak Spanish with my thick Castilian accent, one of those men agreed to talk to me. "If you just jumped the fence we try to be good and give you a deal. If you are European we charge you more and if your car looks expensive the price goes up". At least, they have a heart... 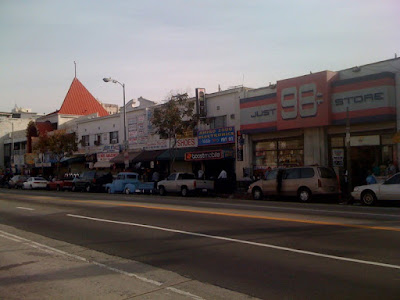 Alvarado on a Sunday morning

The cost also depends on how fake the ID looks. The quality of the number it's key too. "If you want a green card with a real number you are going to have to pay for it, but we can get you anything". The price of the best ones, $700, looks very cheap to me, compared with New York, where as far as I know you have to pay at least $2000 for a good green card in the black market. "The business is bigger in LA and we sell mainly fake numbers but every employer knows it and everybody plays along" this guy told me.

He was caught months ago when he sold an ID to a cop in the area. He was deported but crossed the border again; it cost him $4000. "I have done it a few times, so that was a 'good customer' price; if not it could have been $5000 or $6000". He used to work in construction in LA but he wasn't making much money. "This is a better business, it's worth the risk" he says, although he wouldn't say how much he makes. "In Mexico there is no money and my girlfriend is here so I had to come back". Whether it's love or money who keeps him here, he doesn't even think about going back to his country. Neither are millions of illegal immigrants who are trapped in all kind of emotional or economic webs. 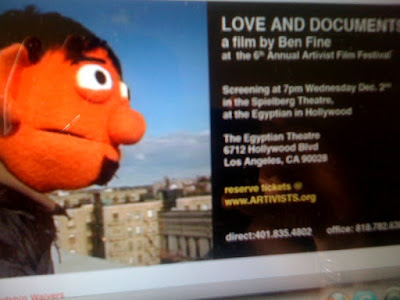 Picture of 'Love and Documents',
a great short movie recently screened in LA and
directed by Ben Fine using muppets.
It's based on the following story and it´s a good example of how art
can help to raise awareness:

I have a very good friend in New York who crossed the border more than ten years ago. He's married to an American because he loves her but he can't get his green card because he entered the country illegally and laws don't forgive it. It's a catch 22 situation. They are trying to press the government to change the current law and include their case in the future immigration reform: there are at least half a million people in the same situation. You can read about it here, and you can help them by sign their petition for the waiver reform here.
Posted by Barbara Celis at 2:53 PM