GETTING TO KNOW LOS ANGELES #1 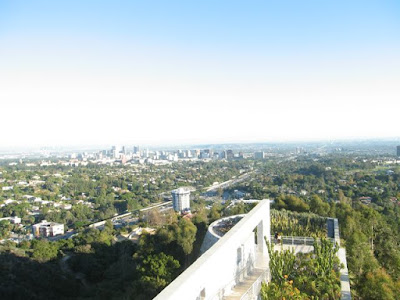 Yes, believe it or not I am still in LA. I've been 'missing in action', I am sorry, but I had to organize many things in order to stay here in December so my blog suffered of lack of attention, but I am back!

It wasn't difficult to avoid returning to New York: the winter is killer there and December presented itself in LA under the warm light of my beloved Cadiz, (who knew it???) and with different kind of temptations, like a very cheap apartment to stay in or a kick-ass bike to be a rebel and bike instead of driving in LA so, how could I say no? Plus, I am a journalist working for a newspaper in crisis that shrinks everyday and in consequence my amount of work is shrinking too so I figured I wouldn't miss much... 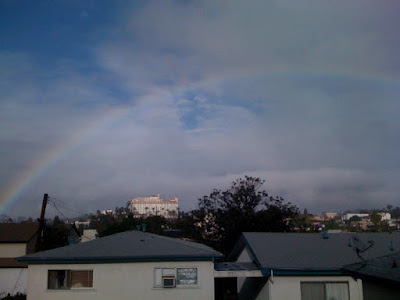 The USC/Getty fellowship provided me with the best possible Cicerones in town, but after those three heavenly weeks, reality hit back. I don't want to be one of those reporters that land in a place and start judging it right away, without really knowing or understanding what life is like in that place. That's a sin that we journalists commit too often and I'd like to avoid it. That was one of the reasons for me to stay in LA longer: let's try to have an Angelino life and see if it is possible to understand why this city is evenly loved and hated.

I am going to try to do my best at describing very simple experiences that are also related with important discussions that are going on around the country and the world, like health care, public transportation, public spaces, culture, immigration or food. I' ll do it over a series of posts. 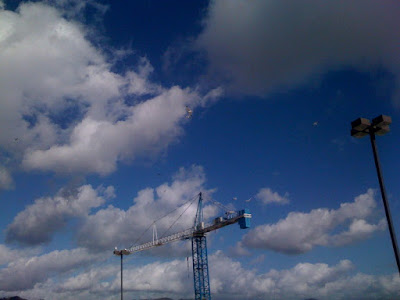 THE ILLUSION OF BIKING IN LA
Yes, I've tried and it's possible. If you don't have a car, a bike makes your life easier, but it's not a solution if you want to go to the other side of the city... unless you have loooots of time!! -I' ll talk about driving in LA in the next few days and also about the project CicLAvia-. My biking trip from Downtown to Hancock Park wasn't too difficult, 45 minutes biking. But the thought of going back in the dark of the night, through blocks and blocks of empty sidewalks it wasn't an appealing idea. It feels very good to be alone in the middle of the countryside looking at the landscape. The emptiness of a city sidewalk and the deafening sound of silence when you are surrounded by inhabited houses it's very foreign and creepy to me... as a Swedish friend asked over and over for a year after she moved to LA, 'where is the city'?????

PUBLIC TRANSPORTATION
Well, it seems that in LA the city is always indoors. It feels weird because the climate would make it the perfect outdoors city but if people don't use public transportation, chances are that not many people will flock to the streets to going to places. They just flock into their cars. In fact, LA must be one of the very few cities in the world whose subway looks like this at rush hour: 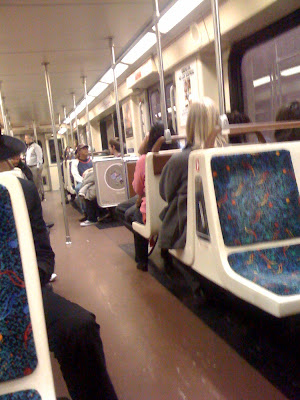 This picture, taken at 8,30 am on the red line
must look like a dream to new yorkers....

The subway is not too bad, it's quite ugly but at least it's clean, and the city is trying to improve it opening new lines and promising a big expansion,. For buses is quite another story. Some of them look like they belong to a seventies horror movie: they feel old and quite abandoned inside -sorry to say that the GPS screens don't make up reality- and the amount of mentally ill people that board them it doesn't make it better. Public transportation in LA reflects class and economy without mercy : an overwhelming amount of users are Latinos, blacks, elderly people or homeless. I tried buses a few times, and I guess it also depends on the neighborhood but I never had such a depressing experience in a bus before. From a very old sick woman with her very cheap wig on to the super fat guy that hadn't shower in at least a month and walked into the bus drinking and screaming provoking zero reactions around, all I could think of is to leave the bus asap. I couldn't, I had to go somewhere. So were many workers that just happen to don't make enough money to have a car. The depressing view they have to endure inside buses every day probably just make them dream of killing somebody. I would end up in a gang if I had to take the bus everyday... It should be mandatory for every Angelino to hop the bus at least once a week, so people with voice and power -the poor never count- would start asking for improvements. Cities need to boost their public transportation system's asap. Did anybody hear about climate change and Copenhagen in LA????

If the city were smart enough, they would make life inside public transportation a less depressing experience, improving the quality of the buses, the amount of them and taking care of their homeless, that choose buses -and public libraries I am told- to spend their time. It seems that now they are less than they used to be, 'only' 48,000, but I am living downtown and I see them all the time, and it's heartbreaking. Governments are there, among other things, to take care of the weakest parts of society, that's what I learnt in Spain. In the USA 'weakness' equals 'looser', that horrible word that reflects better than any other the cultural values in which Americans are educated. That's why people seem to be afraid of the 'public option' in the health care debate. Being taking care of it sounds like a sin to millions of people. But they should realize that paying for health care doesn't guarantee real or better care...
Posted by Barbara Celis at 12:40 PM