FALLING IN LOVE WITH 200 GUITARS 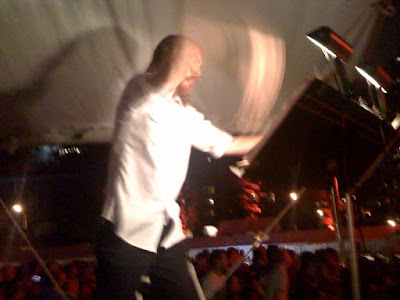 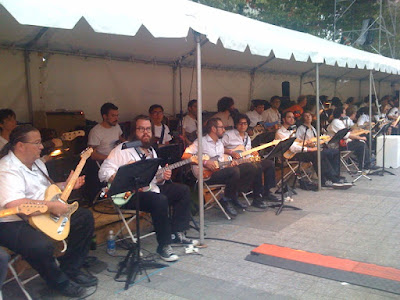 I was quite skeptical about the whole buzz surrounding the Rhys Chatham concert at the Lincoln Center on Saturday. The only thing that made me go was the idea of 200 electric guitars playing together. Curiosity always pays back. It was announced as 'the concert of the summer' but to me the idea of a minimalist composer taking over the stage sounded scary. I've tried to enjoy Steve Reich but I haven't been able to. I know, I should, I guess it 's the result of my own ignorance, but I like melodies, and and sometimes it is difficult to find them in that type of music. It can be hard to listen to if you are not used to the genre, but I have to confess that experiencing the performance of 'A Crimson Grail' of Rhys Chatham was an awakening moment. It is not a concert that you ‘see’. Your whole skin gets wrap up into it. There were many feelings, which is what I probably can't find in most experimental or minimalist music. 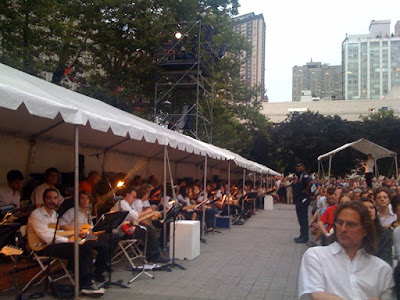 This time was different. Imagine that 200 electric guitars surround you. Imagine that their sound starts slowly traveling as a wave, jumping from one guitar to the other. Imagine all those guitars in crescendo, filling up the air, the sky, the whole city, to the point in which you have to stand up, open your arms and smile with your eyes closed. I saw a few people doing that in the marvelous third movement of an hour plus concert that was definitely one of the highlights of this never ending summer of great free concerts in New York. It was a mix between a rock concert, a great symphony, a bit of church music and a crazy Sonic Youth moment. 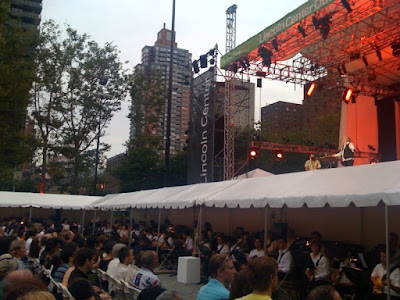 Rhys Chatham on the main stage

Rhys Chatham was on the stage directing another four musical directors placed along the Lincoln Center Garden, in which a horseshoe shape of guitar players -the audience in the center of it- performed this piece created in 2005 for 400 guitars and adapted to a smaller ensemble for the USA premiere. There were three movements. The first one took me completely by surprise, what a beautiful piece of music, melodically simple but organically very complicated, many voices, many volumes, playful and breathtaking. It gave me the goose bumps. 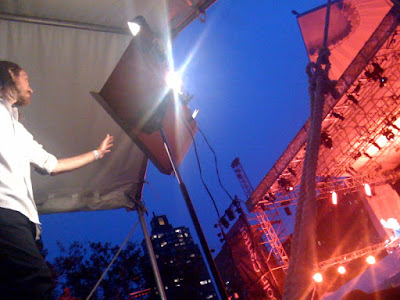 One of the four musical directors
and Rhys Chatham far away on the main stage
The Lincoln Center made a call last year to find amateur and professional players willing to perform for free in the one night only event. Unfortunately, the rain killed the performance last summer so they postponed it for a year. Rain was threatening again on Saturday -it has never rain as much as this summer in the city- but this time we were lucky. Many of last year musicians came back. A few new ones were recruited. Among them, Manon, the 17 year old daughter of Chatham, one of the few female players. This French girl, talking in her broken English after the performance, told me that she had seen her father working in this piece for so long that she asked him to be part of the performance, even if she has played guitar only for a year. "It is not a difficult piece to play but you have to learn to listen to the other players" she explained. The feeling after the concert? "wowwwww, I don't have the words to explain it in English!!!". Sitting by her side, another performer, Emilie Friedlander, a 24 year old violinist and music critic that just wanted to be part of the whole experience, said that "having musical knowledge and experience in an orchestra was enough for me". In fact, Chatham didn't audition the candidates, they were selected based in their musical backgrounds, covering a wide range, from very professional players to beginners. 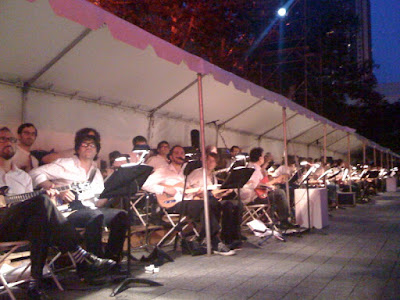 They all did it for free. They got a set of strings and a meal. "We are here for the love of music". Keith Patchel's words summarize the feeling among the performers. Patchel is a composer himself who has actually played before for Chatham and he is in love with 'A Crimson Grail'. "It's a fantastic piece, almost like a Renaissance piece, with chorus speaking to each other from different sides of the quadrum". In that last gorgeous third part that made the whole audience stand up in the middle of it just to feel it stronger, he couldn't sit still either. The power of music. 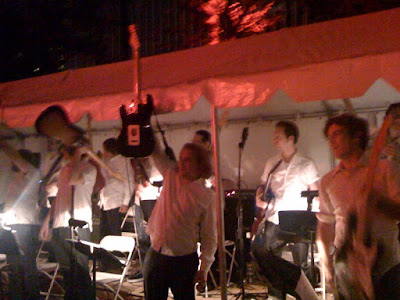 What else could I said? Thank you mister Chatham for having conceived such a beautiful piece of art! (more info about him and A Crimson Grail)
Posted by Barbara Celis at 2:39 AM