(In Spanish and English) 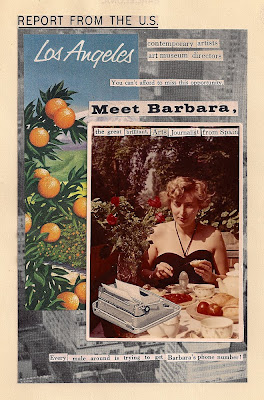 The idea of writing this blog was born the same day that Barack Obama won the presidency. I would have loved to cover the campaign but for different reasons it didn't happen. Only then I realized the web was there for me to write and share my experiences and thoughts. Since last November I've used this blog to look at New York and this country in a very personal way, close to journalism but not necessary attached to what's supposed to be news. I've also pushed myself to write in English. After almost 10 years living in this country I had to try. That's how I made it to post #80. The number it's not a round one but it doesn't matter. My Spanish friend, the artist Gloria Vilches, has done one of her very special collages for me. It's an ironic piece to celebrate very good news that I would like to share because in a way, this blog has helped me to get (I still can't believe it!!!!) here:
USC Annenberg/Getty Arts Journalism Fellowships awarded to leading arts journalists
August 11, 2009

Under the direction of Sasha Anawalt, director of arts journalism programs at USC Annenberg, this year's Fellowship will focus on the visual arts and architecture of Los Angeles, with attention paid to the challenges confronting journalists working in the digital-media era. How does today’s arts journalist, especially during a worldwide economic downturn, become the focus for conversation and persuasion? The 2009 Fellowship will be about enabling arts journalists to take a bold lead and tell stories that meaningfully connect audiences and artists.

With support from the Getty Foundation, the program, now in its eighth year, seeks to establish a new standard of excellence in arts and culture coverage. The Fellowship’s philosophy is guided by a core belief in the importance of first-hand encounters with both artists and journalism colleagues. The three-week program begins November 1, 2009.

Joshua Samuel Brown, writer and photo-journalist. Based primarily in Asia for the past 15 years, Brown has contributed visual and performing arts stories to the South China Morning Post, Hong Kong Standard, Sculptural Pursuit and many other publications. He has co-authored four recent Lonely Planet titles including Taiwan, Singapore and Belize, and is the author of “Vignettes of Taiwan,” published by San Francisco-based Things Asian Press.

Barbara Celis, reporter, blogger and filmmaker. For the last five years New York-based Celis has regularly covered American arts, culture and politics for Spain’s El Pais. She is a frequent contributor to ARS, Ioncinema, La Repubblica, the Spanish editions of Vogue, Rolling Stone and Cinemania. She has a bilingual blog, www.cronicasbarbaras.com and is finishing her first documentary, "Surviving Amina."

Kelly Klaasmeyer, editor and critic. Editor of Glasstire, an online magazine devoted to the visual arts of Texas, Klaasmeyer also writes about art for Houston Press. In 2004, she was awarded the Lone Star Award for first place in Arts and Entertainment Criticism. A working artist, she holds an MFA in Painting and a BFA in Painting and Drawing.

Randall Roberts, editor and critic. At the LA Weekly, music editor Roberts oversees the multimedia music content of laweekly.com and the music blog West Coast Sound. Roberts has also written for the Village Voice, Salon, Stylus.com, Seattle Weekly and other publications. His work has been honored by the Association of Alternative Newsweeklies, the National Association of Black Journalists and Association of Food Journalists.

Matthew Westwood, writer and editor. As arts editor of the national daily newspaper The Australian, Westwood is responsible for coverage of the nation’s fine, popular, and indigenous arts. He writes mainly about classical music and opera, and the performing arts generally. He is a former editor of 24 Hours, a classical music magazine, and features editor on the startup team of London’s Metro in 1999.

"These Fellows are more interested in what the art they are covering makes us think than they are in telling us what they think about the art," Anawalt said. "Their knowledge, imaginations, and the high level at which they practice journalism -- half of them internationally -- help them foster direct and sometimes intimate conversations between their subjects and those who depend on the media for arts information. They will challenge the program further to push toward the edges where text, image and voice meet on the Web."

The 2009 USC Annenberg/Getty Fellows were selected from an international pool of over 90 applicants from 24 American states and 16 foreign countries by a committee of arts journalists and journalism school directors.
Posted by Barbara Celis at 12:32 AM