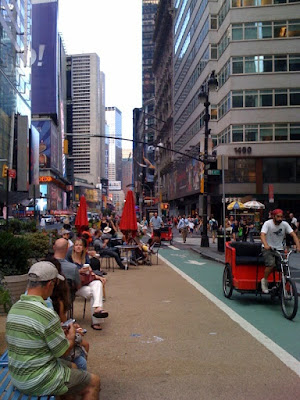 Times Square is still tourist's paradise. If visitors could vote in today's primaries for mayor, Michael Bloomberg ("please call me Mike") will probably be reelected - don't worry Mike, without their vote it will happen too, unfortunately nobody is ready for Reverend Billy yet-. To his credit, it was Bloomberg who chose to seal off the heart of Manhattan to traffic and bring a bit of peace to this area. It didn't take much, just a bunch of tables, chairs, a few umbrellas and some stolen space that once belonged to cars and now belongs to humans. During daytime not only tourists but also new yorkers enjoy it. Coffee and cigarette breaks have a new taste in midtown. 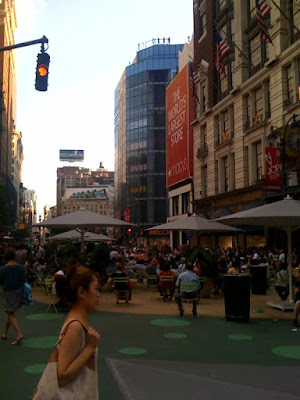 Herald Square
At night tough, the taste is very different. Along Broadway, from Times Square to 34th st, all those chairs are occupied by homeless. 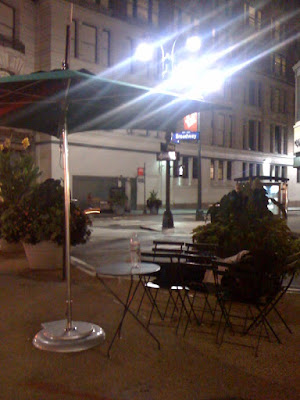 One after the other. Bloomberg either don't think or don't care about having this stretch of city looking 'ugly' to those same tourists that fight for chairs during daytime. I still remember that years ago, in Madrid, outrageous mayor Alvarez del Manzano banned benches in Puerta del Sol to avoid homeless in the area. Fortunately for us, Bloomberg and Manzano don't seem to talk very often and so far, the vision of New York by night as a homeless city is silently taking shape in those new bed/chairs. I don't mind. The Times Square of the new century always looked too fake to last. So fake that now that reality is hitting back after a year of official crisis, homeless are visibly back to remind us that times are tough. Maybe Bloomberg didn't find a place yet to hide them before his reelection, like Giuliani did in the early nineties. Or maybe they are so many that it's already an impossible task. I hope the solution won't mean taken those chairs away from citizens. Homeless, after all, are citizens too and if a city is not able to provide them with a decent rooftop, let them at least profit from one of the few bright ideas of a politician. 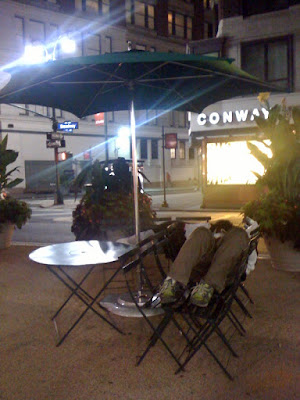 Some fresh data from the 2008 census to think about, especially because for most of that year everybody was still living the 'high life', so imagine how the data about 2009 will be: